Got the button to work! I had to download it to my desktop and add it as an image, but yay!  So anyway…on to the miscellaneous of manic Mondays.

One.
If there is cardboard over your passenger side window, it’s darn near impossible to turn left.  And if you’re relying on a six year old to tell you if a car is coming, well, let’s just say it’s a bit scary.
Two.
Having a mechanic in the family is way more convenient than having a teacher.  My brother will be coming tomorrow to (hopefully) fix the window problem.  And I will never take car windows for granted again.
Three.
My blog is under construction.  I was going to leave it alone until summer when I have more time to really focus on adding some more gadget-y button-y things that I will solicit help with immediately, but I got interested in something different.  I blame Kim because blogging is a great way to avoid the laundry.
Four.
Speaking of laundry, you can click on over to my sisters’ latest ventures and read all about Lavagirl and Shark Boy or the Prince of Zion.  But remember I was first.
Five.
I’m controlling my chaos (which I’ve learned is a syndrome) and am trying to keep the house clean in small increments.  But not while I’m blogging, see #3.  Thanks to April I checked out the crazy FLY Lady and once I navigated the foreign language, found some ideas that totally work for me, and guess what?  I realized I’m not that hopeless.  I was doing a lot of this (like cleaning hot zones for 15 minutes a day) already.   How do you clean so you don’t become a feature on TLC?
Six.
And as part of the great declutter cleanout redecorate livebetter deal I’ve got going on, I’m feeling more in control.  All you perfectionists out there are nodding along.  I don’t know why a clean sink and knowing I took one small bag of outgrown baby clothes out of the office makes me feel more settled, but it does.  Okay, so I know exactly why it makes me feel better, but how much psychoanalysis are you looking for right now?
Seven.
Is the number of completion.  Mama says that’s why there’s seven of us sibs.
So today I’m stopping the randomness right here, though I’ll leave you with this final question to ponder.
Today in my reading class we began to discuss that great Shakespearean tragedy of star-crossed love (I’m selling the boys on this by telling them it’s really all about sword fights).
I was asked, “So, is Romeo still alive?”
And that’s what reality tv has done to this generation.
Or maybe he was being deeply insightful and beginning a commentary on sacrificial love.
(even though I personally find R & J to be rather selfish)
Nah…he heard me mention the Leornardo Dicaprio version and figured anyone Mrs. Brackett thought was cute in high school had to be long gone by now. 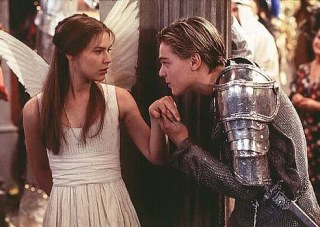 For my eyes never saw true beauty til this night….

One thought on “Miscellany Monday”