There’s nearly a foot of snow on the ground, both grandmothers have moved into her house, and on Friday after nearly 12 hours of regular contractions, the midwife sent her home with no encouragement that baby would be arriving this weekend.
But they like to surprise us, don’t they?  In the midst of what has been an overwhelming, jam-packed, too-many-commitments-to-process kind of week, and only four days after we celebrated my own second child, my sister gave us this beautiful baby boy.
He decided early Saturday morning that he was ready and she moved fairly quickly through labor, quickly enough that since she was birthing in a hospital that doesn’t give epidurals and was a bit afraid of the alternative, she made my mama so very proud by giving birth naturally.  Then, as if that wasn’t enough to be impressive, the stats came in: 9 lbs 13 oz, 24 and 3/4 inches.

Now that’s heroic.  So far he’s been referred to as hoss, whopper, and fatback.  Bless his heart. 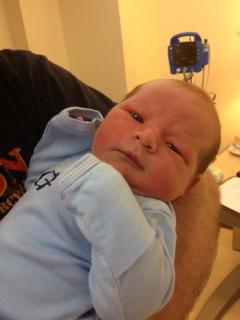 He’s beautiful, huh?  If you want to donate funds so I can travel 1200 miles to squeeze his cheeks, let me know 🙂  and that’s a Get Dolled Up Boutique gown he’s sporting.  Personally, I think it’s cuter than the camo, but that’s just me.  I might be biased because it’s also been worn by this sweet bug.
I know some other folks who wish they were able to journey north to hold great-grandbaby #9.  The past ten days or so, we have all been praying diligently for my grandfather’s recovery from what he calls “old age.”  He’s been in and out of two hospitals and says he’s not telling anyone anymore when he feels badly because we just take him to the hospital.
Ever since this began, my sisters and I who are local have been taking shifts to keep him company.  But none of the rest of us have pulled the load my sister Katy has.

She’s pretty bossy and she makes the rest of us jump, but she gets the job done.  For the past two weeks, she’s put her own life on hold to be there for my grandparents so my father could continue to work and be home with our youngest sister, since Mama is helping with the new baby.  She stayed overnight at the hospital  and helped granddaddy terrorize the nurses; she’s cooked and cleaned and driven my grandmother to the grocery store because she’s out of cookies.  Last night I took my family over to visit the grands, and I’m sure today she’s reaping the benefits of that: Amelia had an accident in the bathroom and when I offered to mop, my grandmother said I was alright, Katy could do it.  Nice.

But seriously?  Between my own four kids and nearly four dollar a gallon gas, I can’t be there the way I would like.  I’m so grateful that my sister chose a new home that’s close enough for her to be available when needed, especially since, right now, that’s all the time.
On a Manic Monday note, I think I’ve figured out the cause of some of my stress.

We’re now post-consignment sale and this clutter has GOT TO GO. Hopefully it can be today’s naptime project.  For me, when my mind and heart and house are all cluttered up with ideas and projects and worries, life becomes manic.
I hate that because it means I yell more and grumble lots and don’t appreciate the sweet moments.  Like what we were doing while my nephew was making his appearance…. 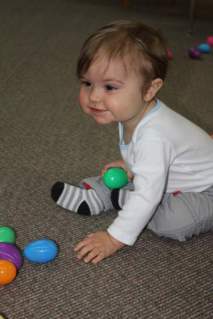 40 degrees and steady rain call for indoor egg hunts and puppet shows with friends.  Come on spring, I’ve got three linen dresses and a jon-jon for Sunday and they won’t look good with overcoats!
How’s your Monday?