We have these three beautiful Bradford Pear trees in our yard.  They’re one of the best things about our house, really, and usually they are full and white and beautiful this time of the year.

But crazy early summer weather had them blooming early.  I’m just glad I thought to get these pictures before the March winds blew all the blossoms off and made the girls ask, “Mommy, did it snow?”

Third in line is the late bloomer.  Always a week behind the others, this tree kept its blossoms for days after the others were completely green, and it’s never quite as full or lush.  It blooms slowly, as though its afraid to hope that spring is ready and winter has gone.  It reminds me of a child peeking out her door to see if anyone else is awake before she tiptoes down the hall.

It waits patiently for its turn at perfection.  For its moment of readiness in this new world.

It reminds me of me.

Finally, at 32, I think I might be getting it.  I might finally be becoming comfortable with who I am, with what I believe, with the person, wife, mother that I am.

That I was created to be.

Sometimes I stare at others whose blossoms are full and radiant.  I wonder when I’ll be that confident.

Then I look down and see a rounded belly nurturing an unexpected and lovingly anticipated baby boy and I remember Who had confidence in me first.

I can do all things through Christ who gives me strength.
~Philippians 4:13
Linking up today at Capturing Motherhood

Like Loading...
Inspired by Julia, I’m linking up with Amanda today.
Well, and I haven’t blogged in a week and my scattery pregnant brain that tried to make coffee
without water this morning is having trouble focusing.
I like linkys that give me a focus.
and a list.
I like those too.
So, lately I’ve been enjoying many random things…
One.
Like my new cookbook.

Source: google.com via brewmama on Pinterest
I’ve blogged a bit about some of the recipes I’ve made, but let’s just say, it’s been great to use whole wheat flour in pizza dough and waffles and not have my kids or my husband complain.  And we cannot wait for our garden this summer to really use this baby.

Two.
On that same note, I’ve really been enjoying this blog lately.  I like the simplicity and the motto and the reminder that living simply can also mean that you eat really well.  Today’s post is on my menu for next week.

Three.
The lovely Biltmore Estate
We visited this weekend to take advantage of our passholder appreciation discounts
and to take a behind-the-rooms tour.
Unfortunately, this baby didn’t want to climb six flights of stairs and I had to quit.
Oh, well.  Guess we’ll have to go back.
And I’ll have to post on how to enjoy Biltmore with little ones because my girls love it.

Four.
Getting Organized
I’m trying, really I am. I have a list of 32 things I want to get done before my 32nd birthday in February.
So far, I’ve done six of them.  For some reason, though, I keep finding more things to add to the list which seems kind of counter-productive don’t you think? 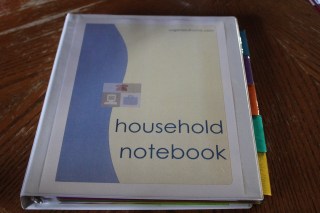 We made these at MOPS this past week and I’m using it.  Really, I am.  and I’m going to.
I just have to remember it’s there.  Today I made a list of the little chores (dishes, laundry) I want
done daily.  And I did them.  Yay, me.  But then I ate lunch and now there are dishes in the sink again.

I started making homemade pizza several months ago and now I’m addicted.
What are your favorite toppings beyond the usual?  I made chicken and spinich last week, sausage and green peppers this week.  Joshua said I should take the picture after I put the cheese on but I thought the peppers were pretty.

Seven.
Food.  Recipes.  Cookbooks.
I think I might have an obsession.  I have decided to embrace the fact that I’m not crafty.
But I can cook pretty decently and I really like that.
So I think I’m trading in my modpodge
for a spatula that spreads icing.
But will my freezer ever look like this?  Probably not.

Eight.
(trying to) Live Simply
I made my own laundry detergent.
and I’m not buying napkins until I can get them for (almost) free, so cloth will have to do.
After all, I have a 5-gallon drum of laundry detergent to use.

Nine.
I wish I was enjoying my laptop.
Joshua bought me a used ibook off craigslist for Christmas.
I can’t get it to connect to our wireless.  It tells me the password is wrong. It’s not.
Apparently we have a WPA and it needs a WEP?
I don’t even know what I’m talking about here.  Help, please.

Ten.
Planning a Nursery
It’s taken me a while to get used to the idea that soon there will be another one.
and this one isn’t a girl.
We finally agreed on what to do about a nursery and Amelia will be relocating to our office and sharing this larger-ish space with baby brother when he relocates from the pack-n-play in my bedroom.
So we’ve got months to work on this idea.
Thank goodness for Pinterest.

We’ve been on fall break for the past couple of days.  Translation: Mommy has been lazy and Daddy and the girls have been working hard on their big project.

It’s a “wild garden.”  We’re going to turn this little plot into a maze of vegetables and flowers and butterflies (hopefully) in the spring, but apparently the work starts now.  My job was to supervise and take pictures while the girls and Joshua hauled mulch and scraped dirt. 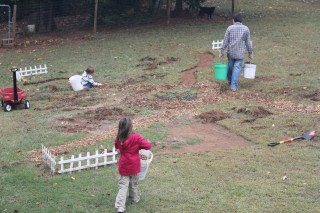 Then I was worn out, so Amelia and I had to go inside and take naps.  It’s tough to supervise.  And did I mention, it was super cold on this day?  On Monday it was 78 degrees, on Thursday it was 48.  Then I started wondering why the house was so cold, and guess what?  The unit isn’t working.  No idea how long it’s truly been out since it’s been off for about ten days and the windows have been open.  But yesterday, the thermostat quit registering as well.  Good thing last year we invested in this lovely piece so our tootsies can stay warm. 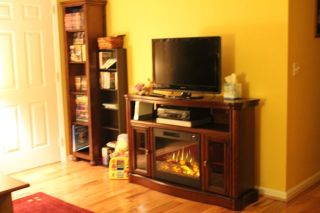 On Thursday, we also visited my OB office for an ultrasound to determine just when this new baby is actually due.  Here’s a little TMI for some of you: when you get pregnant on your IUD, it’s hard to determine exactly when that might have occurred.  Hence, the three ultrasounds I’ve already had.  So, we thought Peanut was due more mid to late May, but it’s been decided to move the date to May 8th.  Which might break our birthday streak: 9-19, 3-19, 2-19.  But since this baby is on it’s own timing, who’s surprised?

We took the girls with us to see the baby, and all they kept asking poor Jessica was, “Boy or girl?”  No amount of “it’s too early” could convince them.  Here it is…boy or girl?

Kind of skeletal in honor of Halloween.  My dates were changed to show that baby measured 11w2d, so we’ll check back in November to answer that all important question.  Yes, this time I want to know.  Joshua doesn’t, but I told him I’d be happy to find out and he could just not speak to any of my friends or family or check facebook between now and May.  So, he gave up the argument.  I think he’s saving his breath for the name argument, um, discussion.

Now we’re having a lazy Saturday that needs to get a move on if we’re going to make it to the farm for apple picking later today.

Where are you rambling off to this Saturday?