For all posts in my #31Days series on Living Local click here. 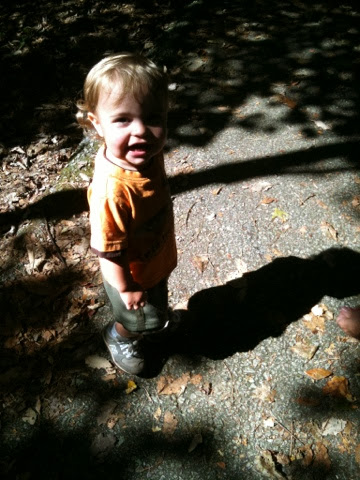 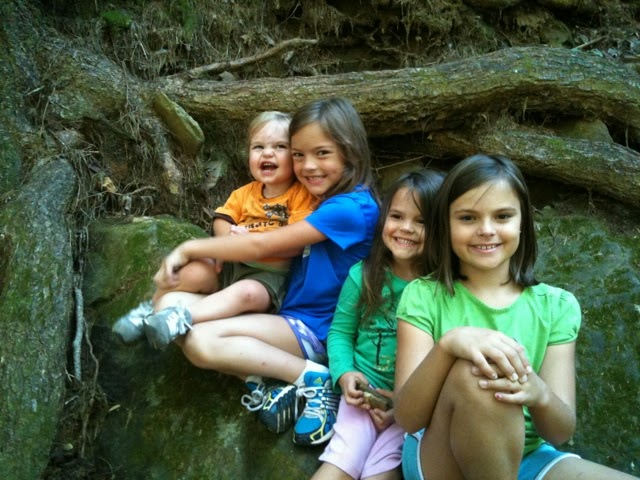 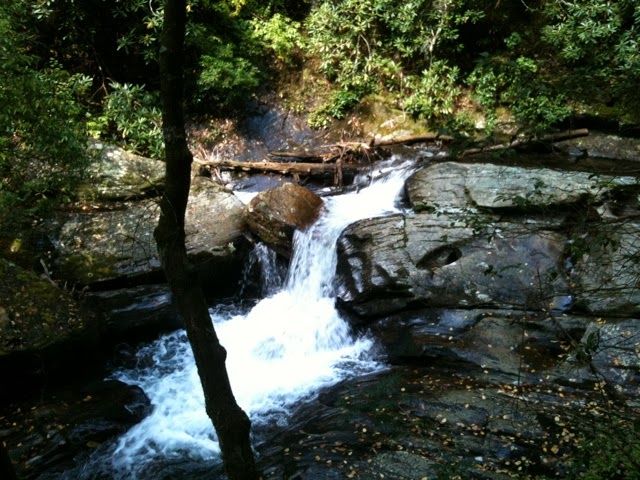 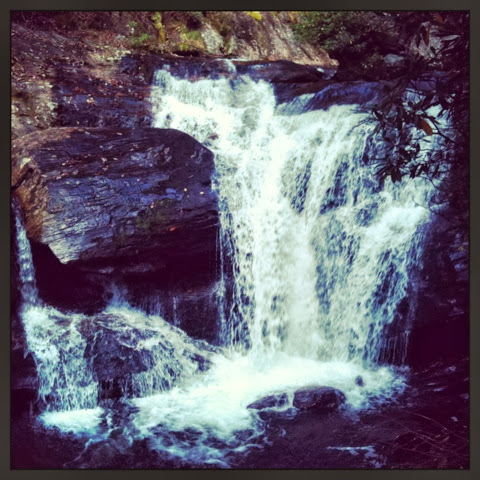 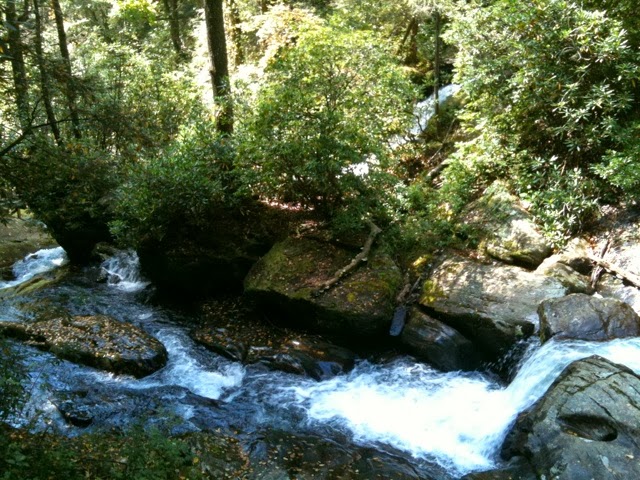 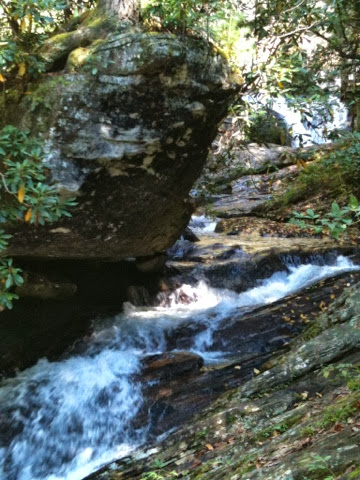 I love a waterfall.  The rush of water over rock never fails to sooth my soul. But do you know what my favorite moment of our hike was?

Looking up and seeing this. 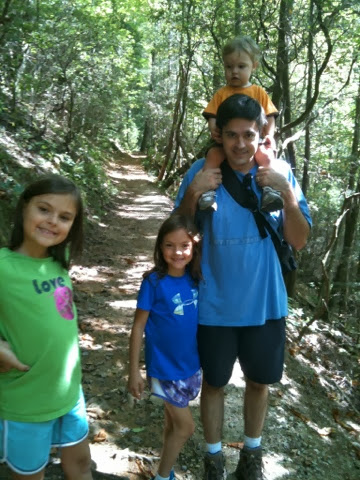 This moment that I wasn’t sure just a few short months ago would happen again.
My husband carrying our children and hiking a trail and breathing deep while
his heart functions normally.
It was a moment for praising Jesus that we still have the capacity to enjoy our simple life.

We’ve been fruit basket turnover for awhile.  Baby in our bedroom.  Amelia in with Annabelle and Madelynne into her own space.  Keep the office.  Lose the office.  Where would we put the computer?

Told him we should have bought a laptop when we got that back in 2009.

Antique armoire into our room.  IKEA shelves from the office to the kitchen.  Little desk where?  The corner unit only fits in a corner….

Finally took down the pack and play and set it up again in the nursery/office so I don’t have to change him on the floor or the sofa in the middle of the night.  Except he cries in the middle of the night when I change him,so I usually do it on the sofa or our bed to keep the girls from waking, but last night I had to just let him cry and move as quickly as possible in the dark to change pee pajamas. I’ll get to the sheet.  He’s still little enough to sleep on the other end.

Now maybe we’ll switch Gus and Madelynne because ultimately it makes more sense to have her in the room with the computer and printer we can’t move.  She doesn’t nap in the middle of the day and impede my coupon printing.

He’s not napping right now, though.  One hour right before Amelia came home from preschool was quite good enough, thank you very much.

Did I mention he can sit up now?  So I sit at the kitchen table with Joshua’s work laptop on days he doesn’t need it at work and I’m surrounded by dishes and groceries and projects and I can’t seem to focus.

Is this really art what I do?

Maybe not, but I have a masterpiece on the rug shaking a rattle and another one making enough noise to let me know she’s done sleeping.  Two more need to be picked up so I can hear about the nuances and minutia of elementary school and referee the squabbles and the snacks.  It’s good I don’t have a place of my own because I might be tempted to hide and I think I do too much of that already.

Like Loading...
motherhood moments I embraced this weekend….and moments when Jesus embraced me and met our momentary needs….
knowing the ER doc at one in the morning on a friday night
impromptu alone time (well, just one baby) with my husband all weekend

when my mama buys my daughter shoes i really can’t afford right now
and calls it early christmas
three half-pecks of apples waiting for apple butter, apple pie, apple cake and girls’ lunches
who knew they could go so far?
all the ingredients for dinner in the freezer or the pantry
when the baby finally takes a nap that lasts longer than 45 minutes
homemade buttermilk biscuits and pear preserves

so many g-diapers and i didn’t spend a dime (thanks Amy!)
the guilty feeling when i realize that i have elderly relatives right here who need me
and children who love to visit their greats so we will go more often

Leave a comment and tell me some moments you’ve embraced lately; let me know my words aren’t just going into the abyss 🙂

Linking up with  lowercase letters.
this post is part of my 31 Days series.  For all the other posts, go here.

I’m stealing away from my girls and Joshua for a few minutes while they’re lounging on the couch stuffed with blueberry muffins watching a movie and avoiding our laundry list of outdoor chores.  Amelia is doing this.

She wanted cereal with milk like her sisters.  And actually, she did a really good job eating it!

Today we have chores like neatening up the yard that I attempted to cut the other night.  This is why I had no Thankful Thursday post.  I thought I’d do Joshua a favor and mow at least part of our little lot, but I think I made it worse.  The girls were mad because I mowed them a path through their “wild garden.”  Oh, well, at least I got thirty minutes alone where all I heard was a constant roaring which might be an occasional improvement over shrieking.

We’ve kept pretty low-key busy this week.  I finally sorted and framed a bunch of pictures, just in time for Katie’s announcement that she won’t be photographing families anymore.  So, I feel like I should definitely treat the ones (like in my header) from our October photo session with care.

I took the girls to see the new Winnie the Pooh movie.  I love that a review I read last week said Pooh was the only one man enough to challenge Harry Potter on opening weekend.  And even though I spent some time with Mr. Potter first, this new charmer from Disney was well worth it.  Of course, I spent the majority of my time corralling Amelia who squealed, “Beep, beep!” every time she ran into my legs blocking the aisle, and finally I had to take her out because every time Eeyore came on screen (which was a lot considering it’s a film about the 100 Acre Woods crew finding Eeyore’s tail) she called out, “MOOOO!”  I tried to explain that Eeyore is a donkey, but such subtleties are lost on a one year old.

By the way, I don’t endorse taking children Amelia’s age to the movies because they are disruptive for others, but I didn’t have much choice and I’d already promised her sisters and they cleaned the bathrooms as part of their eagerness to go, so what’s a mom to do?

Speaking of Potter, I think there’s a crazed fan on the loose in the Sham.  I’ve spotted two stop signs this week with graffiti that makes the sign read, “STOP VOLDY.”  Personally, I find this hilarious, though I also can’t condone defacing stop signs.

But they are just one of the strange sightings my small southern town has to offer.  My neighbor up the street has a Statue of Liberty in her yard.  Two months ago I thought maybe it was there temporarily waiting on VBS, but now I think it’s their new yard art.

I walked past it several times last night while helping Madelynne learn to ride her bike.  We made her use her own money to buy a new one after she left hers behind her daddy’s truck one too many times.  And because it’s a bigger bike, no training wheels.  No training wheels means lots of frustration for my perfectionist daughter who’d rather not do something if she can’t do it right the first time.  But she’s finally getting the hang of it.  Last night she rode around the entire cul-de-sac by herself.  Maybe I’ll be able to let go long enough to take pictures next time.

This is what I gave Joshua for our anniversary.  Printed out on copy paper instead of a card.  I found it here at a fun new blog I’ve been following.

I’m on the hunt for some new art for the house.  I’m hoping for a Family Rules sign by fall.  I’ve seen a few I like, but let me know if you have a good source or a good idea or want to help me start embracing the idea that we’re going to be living in this house for twice as long as we ever intended.
And now Joshua has gotten all the girls dressed and outdoors, so I guess I better join the Saturday morning work fun.