It can be hard this time of year to find the joy in the twinkly lights and the broken nativity and the limp garland when all you want to do is hide away in a corner from the well-wishers and the do-gooders and the hope-bringers.

It can be hard to be facing a holiday ringed with family dinners and friendly hospitality and gift exchanging when there’s one less seat at the table, one less card in the mail, one less gift under the tree.

When I was ten years old my mama walked this journey. My daddy walks it now. This stumble through the season of glad tidings when the tidings dealt you this year were dark and doomed. The tidings of grief under the shadow of fear.

I don’t remember how Mama got through that Christmas. Her mother died three days before December 25 and we buried her two days after. My most vivid memories are that she bought me a black velvet dress and my uncle reamed all the grandkids for daring to ask if we would open the presents Grandmommy had already wrapped and placed beneath her tree. There would have been five of us kids at that time. Five of us to get through breakfasts and toys and tantrums and the joy of Christmas that would forever be tainted with shock.

I remember how we got through last year when the cancer was doing its death march across my grandfather’s gut and the dementia was already eating away his memory. We just didn’t talk about it. We visited and the last time I saw him speak and smile and know me was Christmas Eve. This year I want to talk and celebrate and remember that he loved the mountains and coffee and another plaid shirt wrapped alongside a good book.

Let yourself be wrapped and swaddled and cared for like that baby in a manger. Let that be the only hope you hold because it’s just too much to try and care about shopping deals or holiday feasts or gingerbread houses.

Let this be a season of nothing but love and let love put you back together again.

In that glorious coincidence way God works, I wrote this as part of the Five Minute Friday crew. I haven’t participated in months, but saw the prompt on twitter and had just five minutes this afternoon to word thoughts that had been tossing around for a few days. Then I click over to Kate’s place to link up and her words today? They’re on grief. So much so that she wrote an ebook about it and you can get it for free until midnight tonight.

Christmas makes the pain acute. My prayers are with you if you and yours are walking this journey right now.

On Fridays the writers gather at Lisa Jo’s. We write in five minute increments like ones scared braved. We’re not supposed to edit or backtrack or over think, though everyone confesses to that at least once and that’s why there’s grace for even the most ordinary of writing tasks.

Except on Fridays five minute ordinary becomes extraordinary. Join us? Link up here and give us your five minutes on

He says it in a sweet little voice that bears no trace of sarcasm or disrespect. In answer to everything I say.

“It’s time to take a bath now, Gus.”
“We’re going outside to pick tomatoes.”
“Do you want to go see the goats?”

Fine, he says with his two-year old lisp and blond curls bobbing. I know he says it because he hears me sigh it in exasperation and his sisters reply it when they’re tired of being asked.

I know it has so many meanings. But sometimes that little four letter word just means what it is:
Fine.

It’s fine to be finished.

Lisa-Jo is passing the baton. Four years of wild five minute writing in flash mobs and dark bedrooms and late nights that have gradually gotten earlier because let’s face it–all us mamas are tired by 10 p.m. on Thursday, and she knows it’s time to pass it on.

She’s mentored my writing from afar since the day a friend forwarded me that old Gypsy Mama page and I thought who is this woman who knows the words my heart is whispering and weeping even though we’ve never met?

She told me in a crowded room at a conference last fall that I would know when the time was right to write that book that God has laid on my heart and I’m laying back down at His feet.

And that time came before I was really read to wrap my mind around it and for months I’ve been trying to do it all.

But I think I’m finished too.

I think it’s time I admit that it’s fine if the blog doesn’t get the best of me and instead that part goes to my children and the legacy of words I truly hope to leave.

It’s fine to let what was once the best thing become something I used to do, for the sake of doing what I’m meant to do at this time, this season, this moment.

It’s just fine to be finished with one season so another can come.

I’m not shutting this down….just taking a break. I’ll be posting sporadically and not worrying about being faithful for numbers or platforms or expectations. I have long believed my best writing comes from when my soul is prompted and I need an alter to remember. This past spring I got caught up in trying to promote and that really didn’t work well for me or sit well with my heart for this space. This is the place that has given me the courage to try for new and bigger dreams and I want to honor it with words that are worthy. But mostly, I need to live and focus on those who share my home and life and give breathe to every word I write.

On Fridays the writers gather at Lisa Jo’s. We write in five minute increments like ones scared braved. We’re not supposed to edit or backtrack or over think, though everyone confesses to that at least once and that’s why there’s grace for even the most ordinary of writing tasks.

Except on Fridays five minute ordinary becomes extraordinary. Join us? Link up here and give us your five minutes on

Sometimes the build up is more than I can stand. My fingers twitch and my eyes flick and I start to breathe convulsively as I stand surrounded by mounds of laundry and last night’s crockpot soaking in the sink.

It’s just too much life.

Is there such a thing? The calendar is pretending there’s white space but really it’s just blank until I get a rehearsal schedule and there’s another calendar of deadlines and due dates and color codes for fiction and non-fiction and the pieces that don’t actually pay inside a notebook for a writer.

I’m waiting to be struck over the head with great inspiration and it’s all around. The steam is rising off the hot pavement after the summer rain and the baby boy is looking for a lawn mower and there’s zucchini in my fridge that was on the vine a mere 48 hours ago.

There’s just so much life.

My fingers twitch and can’t fly fast enough and my mind chugs along not able to keep up with the words, words, words that spill out and over and all around because how do you capture the sound of a morning bird or a summer night?

Deep breathing. Slow. Down. There’s a little white space crammed in that afternoon between the church and the dance studio and it’s at the babbling brook that winds through the forest that grew me up when I was a college intern.

The release comes sudden. The desire to put it down and just savor the words for myself without care for if anyone else will know.

On Fridays the writers gather at Lisa Jo’s. We write in five minute increments like ones scared braved.  We’re not supposed to edit or backtrack or overthink, though everyone confesses to at least once and that’s why there’s grace for even the most ordinary or writing tasks.

Except on Fridays five minute ordinary becomes extraordinary. Link up here and give us your five minutes. Today’s prompt is…

Your thumb rubbed small circles on the base of mine the whole time the preacher spoke the words. Soothing away my nerves and leading me to a place of fine calm where there was only us.

We were barely twenty-two and the ink had barely dried on the diplomas that tipped in our fingers a few weeks before.

Fingers stroke the tiny curls that spring forth from behind my ears whenever there is rain and let go of the wheel to hold my hand and force away distractions when we drive winding roads or busy interstates or mountain passes. You hold tight when we bless our food and sometimes you don’t let go even though you know that makes me crazy because I can’t eat with my left.

Whispers soft in the dark night and hands rub circles on the backs of babies and toddlers who curl tight between us in the bed you’re always reaching across to find me.  Stroking gently on all the places where I feel least beautiful, over stretch marks where I grew our babies, and wrinkles where I crease my head with worry.

Hands that crunch the numbers and wash the dishes and fold the tiny laundry and hold the newborn kittens. Hands that are stronger than our weaknesses.

It was dark and cold and maybe even a snowflake or two was falling from the sky when we walked around that mountain chapel one college night and you took my hand.

And led me home.

Disclaimer: I wrote this on the iPad. Typos should be met with grace. But that’s what #fmfparty is all about. Well that and writing and hash tags and food references. We’re at Lisa Jo’s and you’re welcome there too!

He wasn’t supposed to even exist. That’s what sends me to my knees now and makes me hold him extra tight and give him jellybeans even when he hasn’t had lunch.
He wasn’t anywhere on my radar. No idea he’d be a part of this little family, that he’d be exactly what I needed to crawl out of my own skin and into that of mothering.
And he’s the fourth. It took me that long to really get the amazing grace of it all. I didn’t even know I was missing my life until he was in it and making me see everything through the lens of what if.
What if I had stayed a mess who didn’t really know how much I could love and bend and grow and change because these four little miracles are my stamp on eternity and my charge from the great lover of my soul?
How great the mess can be. How powerful the realization. 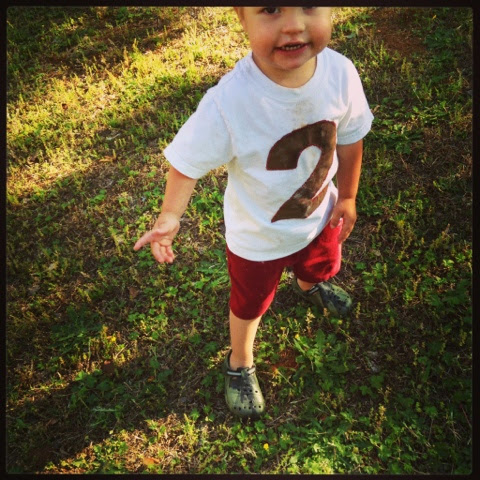